Goldfish Illnesses can make the expert or novice aquarist anxious. Be reassured that all fish owners will experience goldfish disease at some point.

Many are introduced into your tank with new fish. The most important thing is to not ignore irregular activity or signs from your fish. Use these signs and symptoms to appropriately diagnose and treat appropriately.

If you are serious about saving your sick fish it is optimal to have a 'rescue tank' set up for emergencies. The rescue tank is usually a 10 gallon tank with aerator and filter only. Whenever you think a fish is having trouble it should promptly be seperated from your other fish as a lot of goldfish illnesses are highly contagious. This seperation will also allow healing of the affected fish without the other fish picking on it. 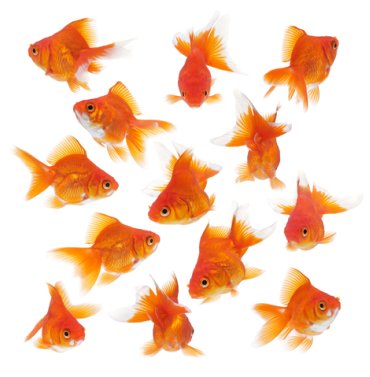 Symptom: A White worm protrudes from a red irritated area on the fish's body.

Symptoms: Fin has missing parts, appears shredded. Eventually can be completely eaten away.

Symptoms: Round parasites will be seen clamped on fish skin. Fish will rub up against items in tank trying to scrape off.

Symptoms: Raised bumps that appear under the scales. With time these bumps will rupture leaving bleeding ulcerated areas.

Symptoms: Gills swell and appear red or pink. Fish swim only at surface. A pus like fluid may come from gills.

Also known as exopthalmus. This is NOT contagious.

Treatment: None. As long as the fish is not suffering there is no reason to be concerned.

Treatment: None necessary. May be surgically removed by Veterinarian.

Causes by parasite Oodinium. This is highly contagious to other fish.

Back to top of Goldfish Illnesses Page.

Save Up to 40% off Awesome Aquarium Supplies at PETCO.com!