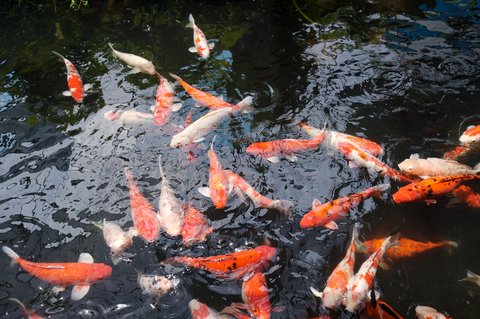 There is archeological evidence the history of fish keeping dates back to the Sumerians (2500 BC) and the Babylonians (500 BC). There is also evidence that the Egyptians (500 BC) considered fish sacred, specifically worshipping the Nile Perch among others. Romans also began keeping fish in ponds, not for decoration but for food.

The Chinese (1000 AD) kept carp and began breeding them selectively. Records show these fish were kept only for decorative purposes. The Chinese people were forbidden to eat them. The Chinese began exporting goldfish to Japan around 1500 AD. Ornamental goldfish made their way to Europe by 1691. There were reports of Europeans enjoying seeing fish kept in a bowl.

In 1805 AD Robert Warrington discovered what is now known as the 'tank water cycle'. This information allowed fish to now be kept in tanks indoors and for the fish to live much longer.

In 1853 the first aquariums were open to the public. The first was at the London Zoological Gardens at Regents Park in England followed later that year by one in New York City. Following their openings fishkeeping as a hobby reached a new level of interest. This interest was heightened in 1856 by a German, Emil Robmaber, who wrote an essay, "Sea in Glass." This essay introduced fishkeeping as a hobby to the rest of the world. The hobby required specialized equipment thus confining it to the wealthy. Fish tanks for tropical fish required heating flames from gas burning lamps under slate bottoms.

With electricity becoming more prevalent in the 1920's fish enthusiasts began experimenting with electrical immersion heaters in glass tubes. Prior to the 1920's, except for highly developed carp and goldfish keeping and breeding in Asia, most fish kept in tanks were individually captured in the wild. In Florida in the 1920's the first commercial fish breeding facilities were developed. This allowed for the cost of obtaining fish for fishkeeping to decrease.

Prior to the 1950's fish breeders needed to be close to their clients. Transportation of fish could only safely occur with in a few hours of the breeders. This meant that the majority of people could not enjoy fishkeeping as there were no breeders close enough to them. After WWII commercial fish breeders began using airplanes to transport their fish around the world. Around this time the ever famous gold fish bowl was introduced making fishkeeping open to all. The wealthy were no longer the only ones who could enjoy fishkeeping as a hobby.

In the 1960's tanks were vastly improved as the glass framed tanks went to glass sealed tanks allowing for better waterproofing and more versatility in fishkeeping. Also, the onset of the acrylic tank which is more lightweight, more crack resistant and can be made into different shapes allowed for a greater variety of tanks.

References for History of Fishkeeping Page

Author of History of Fishkeeping

The 'History of Fishkeeping' was originally written in May 2009 by Troy Hemmila, age 11 of Santa Ana, CA for a homeschool fair project. It has been transferred to this site with his consent.

Click here to return to top of History of Fishkeeping Page.